Steering rods – why so many problems

An old Polish proverb says that you can learn anything with a bit of practice. Therefore, each workshop should be capable of replacing steering rods correctly. Under one condition – they must know how and have proper tools.

During the training sessions and other meetings devoted to the use of chassis, mechanics specializing in steering maintenance usually ask many questions about complaints that appear after seemingly trivial repairs.

Most of these questions are associated with unpleasant experiences that are caused by replacements of steering rods and tie rod ends.

At the same time, mechanics unanimously claim that everything worked well in the past, while nowadays, clients give them trouble each time there is work to be done on the steering. As a result, they sometimes prefer to send the car with steering defects to an authorized service than expose themselves to the client’s wrath. Meanwhile, repairs of the steering only confirm the validity of the old Polish proverb that you can learn anything with a bit of practice. Virtually each workshop can perform them properly, if they know how and have the right tools. Therefore, let us try to explain what are the most common problems and how to address them.

Many mechanics dealing with the adjustment of the suspension geometry are surprised that legitimate complaints are reported after the simplest convergence adjustment. At the same time, they stress that it usually does not happen in the case of the Polonez (even in old models with high mileage) which had steering rods replaced and the convergence adjusted. Customers returning with complaints consist almost exclusively of the owners of modern cars. Everything is done as it should be: the rod ends checked and replaced with original new ones if found faulty and the convergence adjusted using a computer with a precision to the next higher tenth of a degree. And then, after a few thousand kilometers, a characteristic wear (undercut) of new tires occurs. Moreover, a re-examination of convergence shows that it has in fact changed, while the client swears that there had been no collisions, and points to smooth rims without any dents. Each complaint is, of course, concluded with a question: why is this happening?

Convergence shifts are usually caused by overlooked cases of worn steering rods. Let us remember that mechanics claim that tie rod ends had been checked, however, they do not mention joints on the other end of the rods. As we might suspect, the reason for this is quite trivial. Namely, the rod ends are fully visible and it is easy enough to check the play. Meanwhile, the joints located on the opposite side of the rods are hidden under rubber covers closing the inside of the steering gear and it is much harder to check their condition.

To the correct diagnosis requires removing the covers (which in turn requires a bit of work), because only then we are in a position to determine whether a smooth rotation of the wheel to the left and to the right causes the joints to make characteristic “jumps” when changing the direction.

It should be noted, that the car should be placed on firm ground during those test, because the joint connection of the gear rack and the steering rod would have to overcome a certain resistance. Meanwhile, the described test is often carried out with wheels resting on the rotating plates used for setting the geometry (because employees are not willing to move the car). So, in fact it is not the joint play in the steering that is being checked, but rather the condition of bearings of the plates at the test station. And this usually works just fine, even in the cheapest models. Therefore, these are by no means the right conditions to determine the possible jumps in the rods’ joints.

It is equally commonly to check the joint of the steering rods when the car is raised and the wheels are hanging in the air. It would seem that this method is the most valid: after all, the suspension is thus “relaxed”, and then all you need to do is move the wheel horizontally to see the potential play. In fact, this was the case “once upon a time”, specifically in cars with traditional equipment: one long rod and two short ones. However, this method is no longer useful in cars with the steering gear. What is important, is the fact that the joints of steering rods cooperating with such a gear wear out heavily in the direction (position) in which they are constantly loaded (i.e. work normally), that is to say, in a position close to horizontal. After releasing the wheel, when it hangs down as far as the McPherson strut allows, the rod tilts and the “diagnostic force” resulting from jerking the wheel acts in the direction where there is almost no wear! With this setting, there is no rod play and everything (unfortunately only apparently) seems OK! When the rod returns to its normal position, the play in the worn joint immediately reappears.

To sum up, the following recommendations can be given:

When something is wrong after replacing the rods, a typical mechanic sounds more or less like this: “There was some play at the rod, not that big, just one millimeter, so the rod was replaced. The car got geometry, the client paid, but quickly returned because…” and here there are different versions:

What causes such unpleasant (and, above all, costly for the owner of the workshop) situations could usually be relatively easily fixed after reviewing the course of the repair. The rod replacement is typically carried out using a wrench for pipes or a similar tool. We must, however, do justice to the Polish workshops that this happens not only in Poland. It can be also observed at American websites, including http://www.e30tech.com/articles/steering/tierods/, giving an “expert” advice on how to replace the steering rod in BMW E30.

The necessary spare parts presented on this website do not give rise to objections but there is no grease and the toolkit seems rather modest and unsuitable. Even the presented torque wrench seems ancient. What is worst, however, is that the consulting expert gives outrageous advice. In order to remove and tighten the joint he recommends the use of Vise-Grips, and to remove compromising marks he advises to apply… “a rag”. This method is apparently questionable even to the page administrator, as he openly declines all responsibility for the posted technical advice. And rightly so.

But across the Oder River good things flows through the Internet. For example, at one of the websites can see how the joint unscrewed using the hydraulic adjustable wrench. The authors of that page absolutely do not mind that there is no way to rotate the wrench without do ruining in the tightly enclosed chassis.
“Nun wird die neue Spurstange mit den Fingern angeschraubt und dann mit dem Gabelschlüssel festgezogen” – and so the havoc-wrecking continues, this time during mounting a new rod. Tightening torque of the joint (of course using the adjusting key) is, in fact, referred to as “festgezogen”, which can be translated as “to tighten fest”. But how much is fest? 20, 200, or maybe 2,000 Nm?

Slackening steering rod These (and similar) rod replacement methods are the cause of the post-repair trouble. The gearbox is damaged when then the gear rack and the steering shaft is excessively (even to the constructor’s surprise) loaded. The rack and the shaft usually do not break, so the car can drive from the workshop, but the sensitive bearing and seals cannot support the brutal treatment and become damaged. The workshop’s staff has no way of knowing how big the damage is and when it becomes visible. The illustration shows how strong can the forces in the gearbox be when the rod is detached with the torque of 100 Nm (and it is a fairly moderate value) while the rack is not blocked. The force is similar to that which could be obtained if the gearbox was placed under a truck wheel. Everyone can imagine what would be the result of such an experiment.

A handful of companies

Out of the many car manufacturers this whole issue was properly addressed only by few companies. One of them is Mercedes, as the ends of the gear racks installed in the cars of this brand have “Schlitz” i.e. flattening. Thanks to this, the racks can be blocked with a flat wrench, which absorbs the torque. The second of these companies is Renault, which supplies its repair services with special handles performing the same functionality as the flat wrench in a Mercedes. 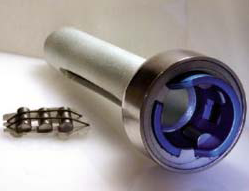 Hercula handle Does this mean that in the case of other car mechanics are helpless and must put up with high risks of damage to the gearbox? The answer is: no. It is not easy but it is possible to find tools that make replacing rods completely safe and trouble-free. Two of such tools are the orbital wrench featured on our page, proudly called Huzar, and a universal handle (tool holder) of the gear rack, with an intriguing name Hercula, introduced for the first time to the automotive world – incidentally, both made by the same manufacturer. You can use these tools in virtually any car and van, which (as you can see in the picture below) is very simple. The picture also shows that while removing and tightening the rod, no torque is being transferred on the gear mechanism! Both tools – the wrench key and the handle – have a very simple design. The secret of their effectiveness, as claimed by the manufacturer, is careful construction and selection of materials. To maintain the correct shape of the wrench and the handle after load, the bodies of both tools are made of stainless steel, hardened and tempered up to 62 HRC. At the same time the plastic of the handle insert in contact with the gear rack is sufficiently soft, so as not to damage the surface. It has also a high coefficient of friction, so it effectively blocks the rack.

The last photo shows that tightening the new rod is done using Huzar and Hercula completely stress-free. The rack is properly blocked, while the rod is pulled with the recommended torque set on the torque wrench. So there is no need to worry about overload of the gearbox mechanisms.